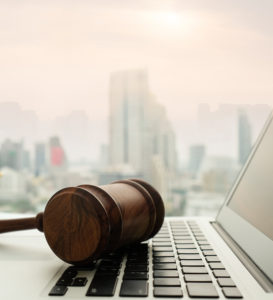 As the FCC’s spectrum auction of 5GULF licenses in the 28 GHz band enters Stage 2[1], the first Auction for microwave frequencies situated above 24 GHz, now designated for 5G services, is expected to wind to a close.  Bidding could drag longer, should a handful of markets continue to receive bids from auction participants. However, the trend will be towards fewer bids being placed, and the marginal value increases between bidding rounds diminishing.

While the Stage 2 rules did result in a short boost to bidding values, the rules also will help to expedite the process of Auction 101 reaching the market clearing price for each license available from the FCC.  As Figure 1 shows, there has been, an expected, general downward trend in the % increase in the total dollars of the Provisional Winning Bids.  Surges in bidding occurred directly following the FCC issued break for the observance of the Thanksgiving Holiday (between rounds 13 – 14) and the announcement of the Stage 2 rules (following round 38).  The Stage 2 announcement also corresponded with a 1-day suspension in bidding for in observance of the National Day of Mourning for President George H.W. Bush.

As of Round 46, 1,522 unique market areas[2], covering approximately 73.5 million POPS, have received bids.  The latest average $ / MHz POP rate, as shown in Figure 2, is $0.01039 / MHz POP, signals an approaching end to the Auction, should we use the “typical” FCC auction that includes eligible bidding on markets of all sizes, nationwide, as a comparison.

Select Spectrum’s analysis is that this average price is squarely within the zone of expectations for a typical Auction End average price range.  This conclusion can be reached by working backwards using the Select Spectrum estimated Verizon / StraightPath transaction LMDS price of $0.0276 / MHz POP, (as outlined in our prior blog post), as a measuring stick for what the average price of what a typical FCC auction might have produced in the band[3].

Auction 101, by in large, contains no markets above 1M POPs for purchase[4], (the largest being Honolulu at 953,207 POPs).  These markets for the most part would be considered by most to be “lower tiered”.  Lower tiered markets, generally, only go for a fraction, (around 20 – 50%, varying by market size), of the average $ / MHz POP of a typical FCC auction.  The current average price of the Auction is at 38% of the StraightPath value, falling neatly within what might be expected.

Markets in the 1-2M POPs range, on the other hand, are generally quite close to the average price of a typical FCC auction.  The Honolulu market, then, is the closest use of this metric that we have within Auction 101 to use as insight as to what a typical auction might have produced.  Since Round 21, the Honolulu Block holding a bid of $0.0253 / MHz POP ($10,272,000), has received no new bids – as such the price can be considered as “final”, for now.  When compared against the Straight Path average $ / MHz POP price, the Honolulu bid finds itself as approximately 92% of that value.  This is remarkably close to nearly 1:1 ratio of markets of this size with the typical average auction price.

Given that expectations were low for the Auction, and that prices seem to be in line with what we might consider “average”, the 28 GHz Auction certainly seems to be performing “above expectations”.

Select Spectrum plans to provide a full analysis upon the close of Auction 101, along with predictions for Auction 102.

[1] At Bidding Round 43, Stage 2 began – requiring bidders to now be active on 95% of their current bidding eligibility, as opposed to only 80% in Stage 1.  Please find additional details regarding bidding eligibility here: https://auctiondata.fcc.gov/public/projects/auction101/reports/announcements

[2] Market area sizes for Auction 101 are licensed on an individual county basis.

[3] Verizon’s acquisition of Straight Path was completed in a semi-competitive environment (having outbid AT&T).

[4] FCC Market sizes at Auction vary.  The 28 GHz auction is based upon County sized tracts, whereas many other auctions are based upon Economic Area or Partial Economic Area tracts, made up of multiple counties.